The latest scientific breakthroughs have allowed GPS technology to be used for the study of the Earth’s shape, gravity field as well as rotation. This is possible through the use of GPS stations firmly placed on the sea floor which are designed to measure the ground motion of Earth’s crustal plates over an extended period of time.

CGPS Station in the United States

The United States alone has around 1200 of the aforementioned CGPS stations in the west, as well as well as little over 25 in the central coast area. Out of those stations, a few of them have already been classified as Global Positioning System Meteorology or GPS-MET.

The most notable example of this is located in Cambria, Los Osos and Point Sal. These stations are operated by various entities such as the South California Integrated GPS network, the Scripps Institution of Oceanography, as well as other groups such as Caltrans.

Apart from using the information gathered by the devices to monitor plate tectonic motion, it was also used for a number of other applications related to the subsidence of the San Joaquin Valley floor.

However, it was later discovered that these stations could determine the potential for flooding of a region by monitoring the amount of water vapor present in the atmosphere. This was especially applicable for North American Monsoon or atmospheric river events.

A major part of this discovery can be credited to Angelyn Moore, a scientist in Geodynamics and Space Geodesy group, based in Pasadena’s Caltech Jet Propulsion Laboratory.

With a doctoral dissertation in “time and Frequency”, she has been instrumental in coordinating an international federation of geodetic GPS agencies and data analysis for Earth science applications.

According to Angelyn Moore, the GPS positioning technique is based on the measurement of signal travel time, from the GPS satellites to the receiving CGPS stations.

This can be used to effectively estimate the geometric distance between the two. However, she also concedes that the signal may be subject to delays caused by the total electron content in the atmosphere, as well as the amount of moisture present in the troposphere.

The troposphere is regarded as the lowest layer of the atmosphere, extending up to 33,000 feet above sea level.

One important piece of data used in this process is PW, which is the amount of water vapor used to determine the level of perceptible water.

It is usually measured in inches and is used by a number of forecasters such as the National Weather Service and the Pacific Gas and Electric Co.

There is a significantly increased volume of PW data available to modern meteorologists, thanks to the rising number of GPS-Met stations that have been installed over the years.

It is a well-known fact that the atmosphere can hold more volume of water vapor as it heats up, which results in even more intense rainfall events. Flood warnings and alerts become critical at this stage.

One key area of concern for researchers are the atmospheric rivers present in the Central Coast Area, which can stretch for several thousand miles across oceans, yet being only a few hundred miles wide. They have the ability to draw vast amounts of water vapor and transport them across vast expanses in the form of a narrow band.

One estimate notes that the volume of fresh water can even exceed that of the Amazon River. Atmospheric rivers along the west coast of the United States are informally named “Pineapple Express”, which have their origins in the tropical waters near Hawaii.

Perhaps the most unprecedented case of rainfall caused by Atmospheric Rivers happened in 1995. It experienced astounding 24 hour rainfall sessions, with 8.4 inches of rain being reported from the Diablo Canyon alone. Wind speeds reached up to 70 miles per hour with gusts of 88 miles per hour in San Simeon.

Because of these winds, an enormous amount of orographic enhancement was produced, with certain hilly areas above Cambria experiencing rainfall more than 12 inches over a 24 hour period. Incidents like the ones described above are the main reason why flood warnings and alerts need to be taken seriously. The implementation of GPS technology in storm and flood warning systems could be key to get the message out at the right time in the near future. 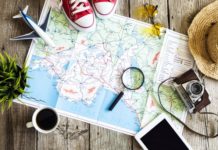 GPS Tracking Is A New Step in Aviation: Will It Help Planning to Avoid Plane Disappearance?